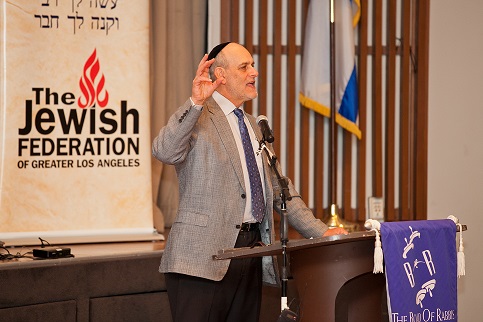 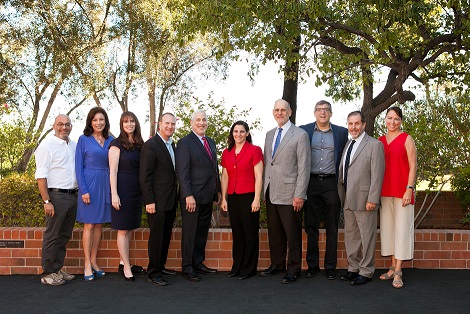 On Tuesday August 16, more than 130 rabbis and rabbinic students from across Southern California gathered together for a day of learning and discussion that marked the start of preparations for the upcoming High Holy Days. The 2016 High Holy Days Conference, presented by the Board of Rabbis of The Jewish Federation of Greater Los Angeles and chaired this year by Rabbi Sarah Hronsky, is our largest annual event, offering rabbis from across the denominational spectrum an opportunity to discuss texts and learn with each other – all while gathering material for their High Holy Days teachings.

The Conference was again held at Stephen Wise Temple. Alan Morinis, the founder and dean of the Mussar Institute, offered one keynote session in the morning on “Judaism as a Path of Personal Transformation: The Teachings of Mussar.”

For the first set of breakout sessions, several of the speakers focused on the upcoming election and how rabbis can speak to this moment in our nation’s history. Dr. Raphael Sonenshein, the Executive Director of the Pat Brown Institute of Public Affairs, offered perspective on this campaign season in a fascinating session entitled, “The End of the World…Or the Beginning?” Cary Davidson, a lawyer specializing in political ethics and nonprofit organization law from Reed & Davidson, addressed the legal implications of what rabbis can and cannot discuss from the pulpit.

Also in the first set of sessions, Rabbi Edward Feinstein taught an engaging session entitled “Cultivating Soul: A Personal and National Agenda,” and the rabbis of the community flocked to hear his wisdom. Lastly, the conference was honored to welcome visitors from the Ethiopian Jewish Community, Demoz Deboch and Gezahen Dereben, who came along with Dr. David Elcott, Taub Professor at NYU Wagner to speak about the urgent need to complete the aliyah of the remaining 9000 Jews in Ethiopia to Israel.

The second set of breakout sessions included a beautiful musical and reflective session led by Rabbi Susan Goldberg along with several musicians with whom she leads services at Wilshire Boulevard Temple. AJRCA professor Rabbi Anne Brener led an insightful session on “Yizkor and Kaddish as Tools for Continuing the Conversation with Those Who Are Gone.” Rabbi David Woznica of Stephen Wise Temple probed the meaning of the Unetanah Tokef prayer and its power to transform one’s life. Reb Mimi Feigelson of the Ziegler School of Rabbinic Studies taught passages from the Talmud about searching for lost objects as a metaphor for finding lost pieces of one’s soul.

After lunch, Dr. Alan Morinis taught a second session about fear, anger, and judgement – drawing on Mussar texts to reflect on these emotions in both personal and political realms. Rabbi Cantor Judy Greenfeld, of Nachshon Minyan concluded the session with a musical birkat Hamazon followed by closing words of Torah from Board of Rabbis past-president, Rabbi Jonathan Jaffe Bernhard of Adat Ari El.

For all those in attendance, the seminar offered an opportunity to renew connections with colleagues, learn from one another, and prepare spiritually to usher in the new year.

Please see the Board of Rabbis YouTube channel for recordings of all the sessions.