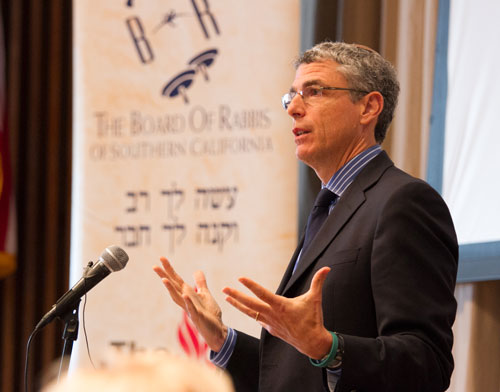 Dozens of rabbis buzzed with excitement August 13 over ideas they took with them for this year’s Rosh Hashana and Yom Kippur sermons. More than 170 colleagues from across Southern California gathered August 13 for inspiration and a truly memorable learning experience with acclaimed leader Rabbi Rick Jacobs, at the annual High Holy Days Conference. The largest annual gathering of rabbis on the West Coast, the conference at Stephen S. Wise Temple in Los Angeles was sponsored by the Board of Rabbis of Southern California/The Jewish Federation.

Jacobs, president of the Union for Reform Judaism, spoke about “Leading Change at the Crossroads of Jewish Life.”

“These are days of truth. Don’t just notice—notice and respond,” said Jacobs, a creative change agent who spent more than 30 years on the pulpits of Westchester Reform Temple in Scarsdale, N.Y., and Brooklyn Heights Synagogue. “We’re living in a time when there are more Jews outside of our walls than inside them. Those include synagogue walls, Federation walls, JCC walls, Hillel walls.”

Jacobs shared the moving story of his chevruta (study partner), the late Rabbi Jake Rubenstein of Young Israel Scarsdale, who worked with Orthodox colleagues to include Westchester Reform Temple in the local eruv (a boundary for carrying items on Shabbat). “We need to think about where we draw the circle, to include people who are on the outside,” Jacobs said. “Leadership is often about seeing the larger arc of history.”

During lunch, the Hon. David Siegel, Consul General of Israel, Los Angeles, spoke to the rabbis about Natan Sharansky’s proposal to accommodate a peaceful prayer space for Women of the Wall at the Kotel in Jerusalem. “We are one people, and we have to work together,” Siegel said.

Federation President and CEO Jay Sanderson, who welcomed the large crowd, thanked the rabbis for their great work in building up a rich and vibrant Jewish community in Los Angeles. Rabbi Ken Chasen, Board of Rabbis executive committee member and senior rabbi at Leo Baeck Temple, praised Jacobs’ imagination and vision. “He’s really a rav’s rav. He understands both sides of the rabbi-teacher equation.”

In the afternoon, Jacobs closed out the inspirational program with a talk on “Text Messages: Mining the Touchstone Texts of the Yamim Noraim.”

“The big questions that are coursing through our mahzor are texts and teachings about the meaning of our lives and the universe,” he said. “Look at the Unetaneh Tokef text, and think about the earthquake in Haiti or Hurricane Katrina . . . Public policy is often where we fall most vulnerable to the pain—not of what we don’t do, but what we could do.”

Participants praised Jacobs’ inspirational speaking style, and many noted that the opportunity to reconnect face-to-face with their busy colleagues was one of the highlights of the conference.

Rabbi Morley Feinstein of University Synagogue, who chaired this year’s conference, encouraged his colleagues to “embrace our passions. Let’s embrace the opportunities ahead, as we look forward to the High Holy Days.”

Please see the Board of Rabbis YouTube channel for recordings of all the sessions.